Below is a moving tribute to long-time and beloved St. Paul’s staff member Linda Pitts in the Richmond Times Dispatch. Linda died of an aggressive form of liver cancer in April of 2020. A memorial service is on hold due to COVID-19.

You can read Linda’s obituary HERE. You can also read this story on the RTD website HERE. 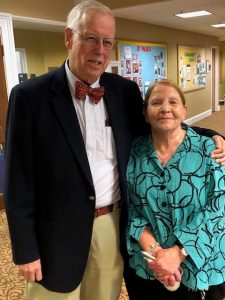 Despair never has the last word

She was a stickler for details, who could be direct, abrupt and downright blunt.

One colleague at St. Paul’s Episcopal Church, where Linda Wilmoth Pitts was the longtime facilities manager, described her as a “straight shooter,” a description endorsed by Pitts’ sister, Judy Bonney.

“When you dealt with Linda, you knew where you were,” said Bonney. “She didn’t mince words. She always respected what someone had to say, but you always knew she would tell you what she thought.”

Pitts knew precisely where she stood; just as clearly she also knew exactly where she had been, which was a place you wouldn’t wish on anyone and somewhere she didn’t want to return to.

Years of addiction drove her into homelessness, estrangement from her family and incarceration — even time in a Colombian prison. Her long, long road ultimately led to historic St. Paul’s in downtown Richmond, across the street from the state Capitol, where she found purpose and love and spent the last two decades of her life. She arrived at that point in her life with the help of many, who offered opportunity and friendship, as well as the support of someone who would have been an unlikely ally years before. Herself.

“At some point, my sister realized that she truly wanted to change her life, she wanted to take control of her of life that she had lost for those years,” said Bonney, her older sister by three years. “She knew, I’m sure, it wasn’t going to be easy, that it was going to be a long, hard path, but she was ready for it.

“Little by little, Linda fought for it. Whatever opportunity she was given, she took it seriously, and she made sure she lived up to her end of the bargain. She really gained a sense of self-worth, a sense of confidence, a sense of self-respect that she hadn’t been able to feel for so many years, and there were so many people at St. Paul’s who gave that to her. She began to understand that these people really cared. The more she saw that, the harder she worked, but she didn’t think of it as work exactly. To her, it was really a joyful thing. She was so happy to have it, to feel that.”

Pitts died April 21, a few months after being diagnosed with liver cancer, news she did not share widely. She was 68. Her absence will be felt for a long time at St. Paul’s, where she, according to her former boss, Mike Koschak, “ruled the roost.”

The Rev. Charles Dupree, the church’s current rector who arrived last summer, described Pitts as “one of the essential vertebrae in the backbone of St. Paul’s.”

Her friend, Susie Scott, said the loss of Pitts is “enormous.”

“St. Paul’s was her life, and the members of St. Paul’s her family,” Scott said. “She was extraordinary. I’ve never in my life known anyone with so much courage in the face of very difficult odds. The main thing about Linda was that she was totally honest and totally trustworthy. If Linda said she would do something — whether it was to be your friend or to make sure the bells in the church rang — she would do it to her absolute utmost and she would never fail.” 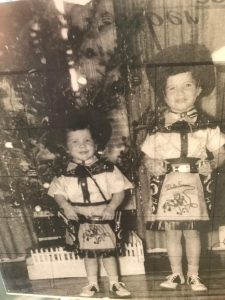 Linda (left) and her sister, Judy (right) on Christmas day.

Pitts was born in Richmond but grew up in Virginia Beach, a “wonderful, happy child,” her sister says, although somewhere along the way she “made a wrong turn, and was fighting something.”

Addiction became her chief opponent. She got involved with various drugs, including cocaine, but it was heroin, Bonney said, that “really spiraled everything. It took her soul away.”

She stole from her family, she stole from others. She served time in jail for heroin possession and grand larceny, petit larceny and writing bad checks. She spent more than two years in a Colombian prison in the 1970s after she was caught trying to smuggle cocaine out of the country.

Barely 5 feet tall, Pitts had a big personality — “a small ball of fire,” says Koschak, who became not only her boss but her frequent lunch companion — and was eminently resourceful, though her quick wits were not enough to keep herself out of one abysmal situation after another. In the 1990s, she found herself in jail in Chesterfield County at Pocahontas Correctional Unit 13, which is where her fortune began to turn when she met Mary Atterholt.

Atterholt, a rehabilitation counselor, was the outreach coordinator at St. Paul’s, who worked with women returning to the community after incarceration. She talked to women who were serving their time about a program at the church for those who wanted to turn their lives around. They would start out as volunteers, working in places such as the community clothes closet or the kitchen for the homeless lunch program.

“Linda caught me when I was out at Unit 13, and she said, ‘I want to be in that program,’ ” recalled Atterholt, now director of victim witness in Middlesex County. “I said, ‘Well, that’s fine. It’s got a lot of restrictions to it, but you’re welcome to come.’ ”

When she was released from jail in 1998, Pitts recalled in a 2002 Style Weekly story about Atterholt receiving a YWCA Outstanding Women Award that she had no home and only six cardboard boxes of possessions, but “I knew Mary.”

Atterholt found her a place to live and brought her into the volunteer program. She worked hard, followed the rules (“That was probably the first time Linda followed rules in her whole life,” Atterholt says) and accepted responsibility.

“It wasn’t an easy transition to make to come from prison to the community,” Atterholt said. “You really had to want it, and Linda really wanted it.”

It’s not as simple as saying, “I’m never going back,” Atterholt said. Real life doesn’t work that way. You need a safe place to live and work, proper support and guidance, and even then …

“Turning your life around means you have to let go of what you knew,” Atterholt said. “Even if it didn’t work, you still knew it. To embrace an entirely new system that you know nothing about, to trust people that you have to learn to trust because when you’re in the criminal justice system you don’t trust very easily … it was a tough road to go down. There were a lot of women who didn’t make it.”

When the position of facilities manager came open, Pitts applied and was hired in 2000. She grew into the job in a way few would have predicted years earlier.

She played a vital role in maintaining St. Paul’s facilities — dust bunnies were her bane, pigeons her nemesis — and making sure the church’s many activities ran smoothly. Said the Rev. Kate Jenkins, a former associate rector, Pitts knew “where every light switch was and which wire to wiggle when the sound system was cranky and who to call when the roof leaked.

“Most importantly though,” Jenkins wrote in an email from Australia, where she is on a sailing trip, “she knew that the people who animate the buildings through prayer, service, fellowship, and ministry were St. Paul’s Church, and she poured her heart into the care of the facilities to support those activities and people, quietly showering them with love.”

Jenkins said her favorite “Linda story” happened late one afternoon when they were in the chapel setting up for an upcoming service. Suddenly, someone started kicking the door and shouting to be let in.

“If you kick my door one more time, I am going to open it up, and you do not want that to happen, I promise you,” Pitts shouted back. 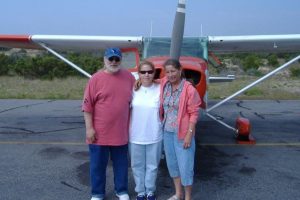 The kicking stopped, and Pitts continued: “If you come to the front door, I will give you hot coffee, food, and see if our social worker is in her office. Got it?” Five minutes later, she had given the man coffee, heated up some food and tracked down the social worker.

Bob Johann, who came to know Pitts as a parishioner and a member on the buildings and grounds committee, said she possessed the sort of “people skills” that allowed her to talk easily with a church member about current events or church history or a contractor working on a project.

“If you wanted the best person to manage a building and the staff to keep it up, Linda would be the one,” Johann said. “In today’s lingo, she ‘owned’ the buildings and grounds of St. Paul’s. Linda thrived on maintaining our facilities, and we thrived because of her.”

Pitts led her own sort of ministry, visiting parishioners in the hospital or going out of her way to hire someone who needed a helping hand, in much the same way she was given a hand up when she needed one.

Dupree, the rector, did not know Pitts before he arrived last August, but when he first met her, “I knew that I would never need to doubt her loyalty to St. Paul’s, the St. Paul’s community or especially the loyalty to the staff that she supervised. We both knew that we each wanted what was best for St. Paul’s. While I didn’t know her a long time, I add Linda to my list of church saints, mentors, and guides.”

Along the way, Pitts became close again with her sister.

Bonney said her sister’s years at St. Paul’s “gave her back everything that she thought was gone. She was the sister I had missed for so many years. It’s what gave me joys all these years since.” 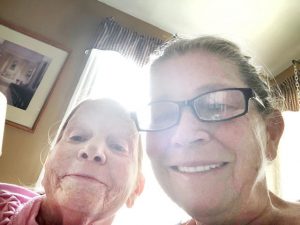 When Bonney, who lives on the Outer Banks of North Carolina, grieved after the death of her husband a few years ago, it was

Pitts who came to her sister’s aid, slowly drawing her out, encouraging her to go on a vacation together that became a much-anticipated annual event.

“If there’s anybody out there who is in the same position my sister was in, I hope they can read this story and understand that you can come back,” Bonney said.

When the right time comes, Bonney will scatter her sister’s ashes in the waters just beyond Hatteras Inlet, where Pitts spread the ashes of her longtime partner, Butch Griner, after he died in 2011.

Meantime, Bonney, accompanied by Scott, went to a funeral home last week and held a small service for her sister. Among the words spoken was a prayer sent by Jenkins from Australia. Within her prayer was this line that Bonney said filled her with peace:

“May her life remind us that light shines in dark places, that despair never has the last word, and that new life abounds for those willing to embrace it.”